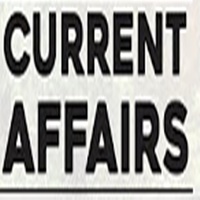 5-Former Rajya Sabha member D.P. Tripathi is no more. The general secretary of the Nationalist Congress Party (NCP) was 64.

6-BJP asks Samajwadi Party (SP) President Akhilesh Yadav to spend time in Pakistan to know the atrocities being faced by the Hindu minorities there.

8- The Central Board of Secondary Education (CBSE) has mandated 75% attendance for the 10th, 12th exams.

10-The Reserve Bank of India has launched a mobile app MANI for visually impaired to identify the denomination of Indian banknotes.

12- The Telecom Regulatory Authority of India (TRAI) has issued a consultation paper on net neutrality.

14-A Centre for Research in Applied Artificial Intelligence (CRiAA) will come up in Hyderabad.

18- 7 opposition-ruled states with their tableaux will be displayed in the Republic Day parade this year.

22- The Indian Institute of Technology, Hyderabad, (IIT-H) and Telangana govt to work on artificial intelligence (AI).

24-Union Minister Giriraj Singh has stressed the need for teaching Gita in schools to keep kids rooted in culture.

25-Three dreaded militants of the banned National Liberation Front of Tripura (NLFT) were held in Tripura.

27-Vikrant Shrotriya has been appointed as Managing Director by Novo Nordisk, a global healthcare company.

28- Two sisters from Haryana were denied passports over Nepalese looks.

29-Housing Development Finance Corporation (HDFC) got a nod to buy a 51% stake in Apollo Munich.

31-Delhi Metro Rail Corporation (DMRC) has launched a free Wi-Fi facility at all the six metro stations of the Airport Express Line.

8-Former US Secretary of State Hillary Clinton has been appointed as the 11th Chancellor of Queen’s University, Belfast (QUB).

9-Afghanistan to set up its own Aadhaar like India, which developed a decade ago.

11-Pakistan Prime Minister Imran Khan admitted that he was asked to work in a Bollywood film by the late Indian actor Dev Anand.

12-Transit and Transportation protocol will be implemented between Nepal and China from Feb.

2-Star Indian grappler Vinesh Phogat said 2020 will be special. She will make her second Olympics appearance.

5- The first game of the Indian Super League (ISL) will take place at the Sree Kanteerava stadium in 2020 in Bengaluru.

6- The sixth edition of the International Young Chef Olympiad (YCO) will be held in India, starting on January 28.

9-The National Anti-Doping Agency (NADA) has focussed on dope tests for major sports events in 2020.

2-Rajkummar Rao has surprised his fans with the first look of his upcoming film, Ludo.

3-The first pic from Farhan Akhtar’s upcoming film Toofan is out.

4-Actor Abhishek Bachchan has shared a first glimpse of his look from the upcoming film The Big Bull.